With the 2016 Open Data Awards just around the corner, we catch up with Serah Njambi Rono, one of the award nominees for the Women in Data, in her capacity as developer advocate at Open Knowledge International.

The Open Data Awards celebrate innovation and excellence in open data across the world. Hundreds of inspiring people and organisations have been nominated. The awards will be held on 1 November 2016 at the BFI Southbank. Explore all nominees and finalists and follow #OpenDataAwards for updates on the night. 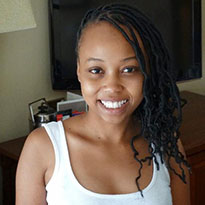 Hi Sereh! What do you do, in a nutshell?

Hello! For over three years, I have served as a developer advocate and community coordinator working with some of Africa’s most impactful civic technology initiatives. In this time, I have championed open data communities in Africa and lead the execution of digital literacy workshops all over Africa and The Middle East, working with Code for Africa. I joined Open Knowledge International in September 2016 and continue to serve as a Developer Advocate, engaging with technical communities and working on open data projects across the EU.

Having just graduated from the University with a degree in Computer Science in early 2013, I set out in search of a job – laden with dreams and in need of an adventure. In this time, I took up a six-month open data fellowship at the ODI that gave me the opportunity to work with troves of open data from Kenya's National Treasury. I learnt a lot in this time, what with the tools, data manipulation and story-telling with data. This fuelled my resolve to pass on this knowledge and work with communities around Africa to help them understand data, the value 'open' adds to it and the endless possibilities it offers them as citizens in their own contexts. Code for Africa's data literacy workshops and Hacks/Hackers Africa communities provided a great platform in Africa for this drive as does my new role at Open Knowledge, allowing me to work on open data projects and with communities around the world.

What are the biggest challenges you face in your work?

The biggest challenge is ensuring resources (time, energy and skills) are invested properly to engage citizens to understand and use open data in a way that makes sense for their communities.

The next big challenge is to remember to go back to the basics of open data, especially for communities in countries whose governments are only now engaging.

Data from governments around the world detailing qualifications of public administrators as well as policies and impacts that they champion during their tenures.

What are you most looking forward to about the ODI Summit and Awards?

The OpenGov and innovation sessions and meeting the wonderful people behind open data work around the world.

The awards will be held on 1 November 2016 at the BFI Southbank. Explore all nominees and finalists and follow #OpenDataAwards for updates on the night.