The UK’s only copy of the Skor Codex presented to ODI President, Sir Tim Berners-Lee 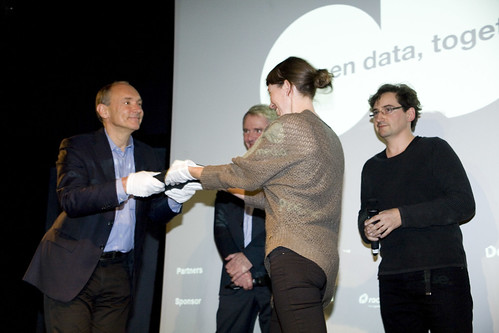 The SKOR Codex, an artwork designed as a lasting symbol of the preservation of cultural data in a non-digital format was presented to ODI Founder Sir Tim Berners-Lee at the ODI Summit in London on 29th October 2013 by Dutch artists, La Société Anonyme.

The SKOR Codex is one of only eight books in existence designed to last 1000 years. They have been created by La Société Anonyme to help inform future generations about the diversity of European cultural life in years to come, when today’s computer systems are beyond recognition.

Printed as raw data, the books contain greetings in four languages, binary encoded images, and sound files selected to portray the diversity of life and culture at the Foundation for Art and Public Domain (SKOR) in Holland. They also contain samples of artworks from different artists and eras.

Printed as raw data, the files are protected from bitrot, software decay and hardware failure by being transformed from magnetic transitions on a disk to ink on paper; the data will be safe for centuries. Instructions in a symbolic language explain the origins of the book and indicate how the content is to be decoded.

The SKOR Codex has been in-situ at the ODI since December 2012 where it forms part of the on-going Data as Culture programme. The other copies are distributed across the globe.

"How do we preserve our digital culture as technology changes? Can you still read the emails you were sent 20 years ago? How will you pass down digital photos and music to your grandchildren? In 1977 a snapshot of human culture was shot into space on the Voyager spacecraft: this book preserves a cultural record in a form that can be understood by our future terrestrial relatives, and embodies the principles of openness as the only mode of communication that persists.”