Guest post: Cities take to Yelp to tell their residents where not to eat

You can now compare restaurant reviews with hygiene data about the state of the kitchens, reports Alex Starritt, prompting dirty eateries to clean up their act

Cities across the US have taken to Yelp to tell their residents where not to eat.

San Francisco, Los Angeles, Raleigh (North Carolina) and many others have started to post their restaurant hygiene ratings next to reviews on the hugely popular site, to prevent outbreaks of food poisoning and pressure dirty eateries into cleaning up.

‘We had a 15% pick up in users accessing the data in one week,’ Stephanie Cushing of the San Francisco Department of Public Health told Apolitical.

Previously, information about hygiene standards was only available on placards at the restaurants themselves or on little-visited government websites – while people looking at restaurant reviews wouldn’t know anything about the state of the kitchen. 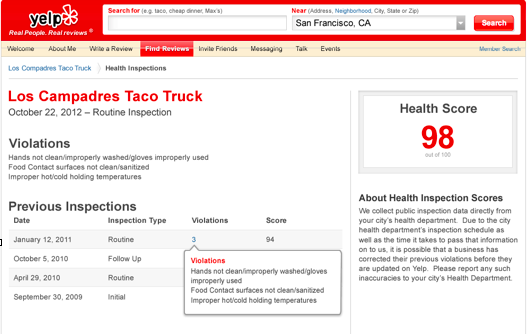 The collaboration also cuts the other way – food safety inspectors are using the reviews, and a clever algorithm, to target which places they should be looking at.

Words and phrases like ‘dirty’ or ‘made me sick’ can be flagged to inspectors, so they visit those restaurants instead of making their spot checks at random. Merging these notifications with the history of hygiene violations and feeding all that information into an algorithm means it can predict the likelihood of problems at specific restaurants.

A study for the Harvard Business Review found that more than 80% of restaurants could be correctly classified into the top or bottom half of hygiene scores using only Yelp text and ratings.

This idea has been taken much further in Chicago, which has used all kinds of information – such as inspection scores, the age of the business and sanitation complaints – to predict which restaurants ought to be looked at.

The need for a more targeted system is pressing: Chicago has 42 employees trying to keep tabs on around 15,000 eateries.

Some 3,000 Americans die of food poisoning each year

The predictive analytics were bankrolled by a $1million grant from Bloomberg Philanthropies, set up by former New York mayor Michael Bloomberg. The city’s Department of Innovation and Technology developed the system with analysts from AllState Insurance and the Civic Consulting Alliance.

This analysis is not, however, available on any review sites, and nor are Chicago’s hygiene ratings. Although several cities have replicated the Yelp model, it has happened piecemeal. Moreover, several places have so far been unable to act on it because they don’t collect their information in the right format; some just have collections of PDFs.

The [San Francisco variant](https://www.yelp.co.uk/c/sf/restaurants ), which has been running for seven years, now covers 5,000 restaurants and 2,000 other places where food is prepared. The information is now available is 17 municipalities, including Boulder, Colorado; Anchorage, Alaska; and the entire state of Florida.

A randomised controlled trial by Harvard Business Review found that restaurants whose low hygiene ratings are posted on Yelp tend to respond by raising standards – and perform better in subsequent inspections.

The website also specifies what hygiene violations have been recorded

Some 3,000 Americans die of food poisoning each year, according to the Centre for Disease Control and Prevention, and there are around 128,000 hospitalisations.

In several cities and other countries, local entrepreneurs have launched apps that draw on government data to provide simply the hygiene rating of any restaurant. The problem with these is that they themselves are little used. The most popular variant in the UK, for example, has been downloaded some 10,000 times from Google Play, while Yelp has been downloaded 50million times.

Overall, Yelp say they have around 25million users per month via the app; 72million via mobile and 77million via desktops (though it’s impossible to say how those groups overlap).

The collaboration with San Francisco’s health department has allowed Yelp to expand what it offers its readers, and CEO Jeremy Stoppelman said in a blog post, ‘Public/private partnerships like this don’t necessarily provide a direct contribution to Yelp’s bottom line, but evidence suggests [this] will have a positive impact on society.’ The company believes this model could also be expanded to other areas, such as healthcare.

Stefanie Cushing said, ‘We were originally approached by another company who tried to sell us a technology which would help me deploy inspectors using an app. But the Yelp proposition was different. We see it is valuable for our customers, who are the public.’

Nikos Manouselis: 'In 10 years I want all food information to be interconnected'