How to scale smart cities: what the experts say

The ODI and Arup hosted an open, smart cities event on 20 April, 2015 bringing together nine speakers and audience from across the public, private and academic sectors.

It explored how we can design, share, collaborate and use information to create smarter cities that put people, rather than technology, first.

The first speaker was ODI Head of Research Tom Heath, who set out the ODI’s vision for open, smart cities: “A smart city is an open city,” highlighting the need for open data, open standards, open infrastructure, open culture and 'open for everyone'. 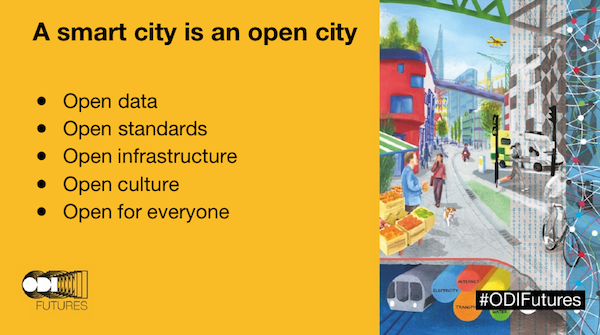 Tom set the scene for a people-centred approach, which was echoed by all speakers, asking what a smart city means to different people. He shared what some of the ODI team had said when asked the same question: we want greater agency over our own surroundings; all actors taking their share of responsibility and optimum connectivity (both human and physical).

Next up, Amey Director of Smart Data and Technology Rick Robinson kept the focus on human outcomes. In his talk on open data, kebabs and town planning, Rick highlighted how the distances and routes between key innovation areas in Birmingham affect how successful, and therefore healthy, its citizens are. He shared how Amey is developing a business case to contribute to infrastructure by investing in smart technology to operate cities more efficiently, and bringing local commercial and council groups together to discuss smart ideas, like stimulating healthy eating initiatives.

The next speaker was Emer Coleman, Director of Business Development at TransportAPI. Emer took us back 20 years, to when the the smart city concept began to take form, and reflected on the three elements that have shaped its narrative since then: technology, humans and institutions. Emer said that in order to scale, smart cities will rely on smart citizens who know their cities and understand data, rights and surveillance and pervasive technologies in decades to come.

Dan Hill, Executive Director of Futures and Best Practice at Future Cities Catapult, then built on the relationship between scaling cities and data. Drawing on principles of architecture and urbanism, Dan explained how he sees data as a tool to help shape smart cities of the future. The question is, what do those cities look like? How do, and how should, technology and data shape the way we live, and how can citizens become better engaged in the process? 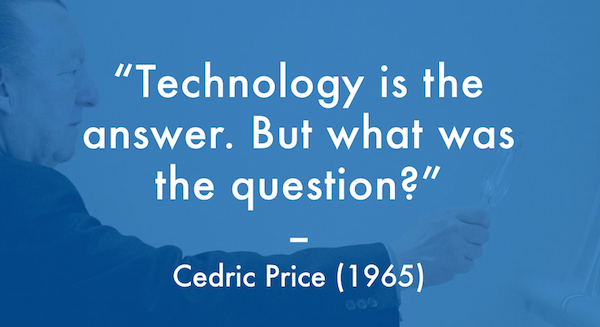 Next, Director at Redfront (the host company for ODI Devon), Simon Gough talked about ‘smart rural’ and the themes within it – such as drone mapping for agriculture – which are centred around technology and land in a similar sense to smart cities, but also have their own unique perspective on what 'smart' means.

Volker Buscher, Smart Cities Leader and Director of Arup Digital then reflected on the changing nature of ‘digital’ – how a new layer of instrumentation and digitisation is being brought out of ‘the cloud’ and into the streets: onto lamp posts, parking spaces, building management systems and beyond. This, Volker says, will stimulate innovation, from hardware to analytics, that will boost operational efficiency and improve the experience of citizens.

Next up, Founder and CEO of ODI Startup Opensensors.IO Yodit Stanton shared her view that the traditional smart cities concept, of expensive, 90’s-style enterprise integration projects, have been over-sold and deliver less than what small startups can do in small teams. Yodit says we should learn from successful Government Digital Services design principles, and apply them to smart cities: start with user needs, do less and make things open (not just data, but systems and infrastructure, so that successful cities can be replicated). 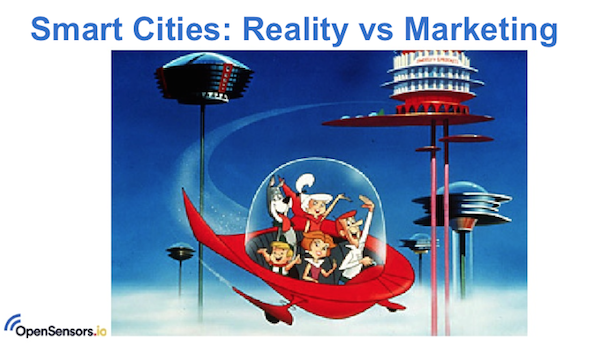 Next, Lead Consultant at Whythawk Gavin Chait said that ‘easy gains’ in open data had been made, with governments publishing more of it, but stressed how much harder its distribution and subsequent impact are to achieve, with multiple actors at play in urban environments. Gavin shared the concept for ‘Smart Streets’ a model that takes metadata and applies it to all commercial spaces within an urban centre, and brings together multiple data series (household income, expenditure and so on) for investors to make better informed business decisions in their cities.

Finally, Kevin O’Malley, Partnership Development Manager of City Innovation at Bristol City Council answered the question of how to scale smart cities with authorities or similar bodies investing in infrastructure and services, communities growing as they benefit from them and ultimately creating their own data and services. Kevin used the example of Bristol to show how there is no one-size-fits-all approach to smart cities, and that citizen engagement is a difficult but vital element of creating a smart city.

For more on the ODI’s smart cities vision and sector focus, visit theodi.org/smart-cities