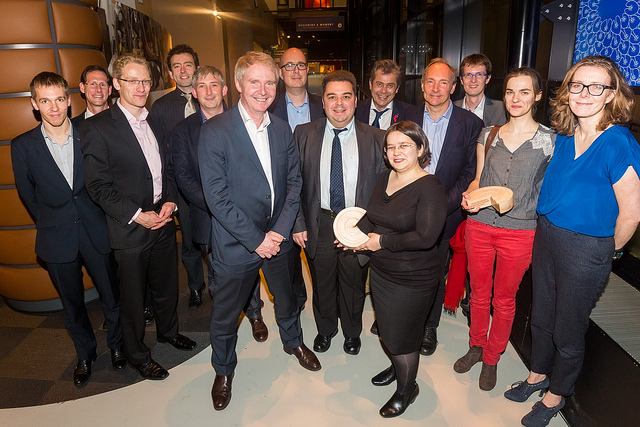 Today, the very first Open Data Awards were held at the Open Data Institute’s Annual Summit and Gala Dinner. Four organisations and one individual were recognised for their contribution to the worldwide open data movement.

The awards were presented by the ODI’s Founders, Sirs Tim Berners-Lee and Nigel Shadbolt, in a ceremony attended by leaders from the business, data and technology worlds.

Nominations for the awards were open to everyone and were judged by a team of six. The panel of judges included Dr Nick Appleyard, Head of Digital at Innovate UK; Andrew Fletcher, Senior Manager at Thomson Reuters Data Innovation Lab; Paul Maltby, Director of Open Data and Government Innovation at the UK Cabinet Office; Rahma Mian, Journalist and Stanford Knight fellow in Pakistan; Beth Noveck, Director of The Governance Lab at New York University; Dr David Tarrant, Senior Trainer at the Open Data Institute.

The chair for the awards was Kathryn Corrick, Head of Content & Learning at the ODI, whom commented:

“We received hundreds of entries for this year’s open data awards, who, excitingly, came from all over the world. All of them are pioneers. This year’s winners demonstrate, in particular, the power of open data to make a difference - be it social, environmental or economic. I am so delighted to be celebrating their work and the contribution so many people are making in using and publishing open data to make a local and global impact”.

The trophies awarded tonight were cut and carved from five British hardwood by Martin Cottis, making them completely unique.

The first to receive one of these special trophies were the winners of the Open Data Business Award, which celebrates how open data can be used to benefit businesses’ efficiency and revenue. Runners up were Socrata and OpenCorporates. The winner was credited by one judge as ‘“knowing data is not valuable without being able to deliver insight.” The award went to Geolytix, whom stated

“This Open Data award is a fantastic recognition of the many hours the whole team have put in to building our datasets, which we believe are the best in the market because of Open Data.”

Following in Geolytix’s footsteps was Irina Bolychevski who won the Open Data Individual Champion Award for her work with CKAN. She says the award will coincide with the product’s growth and expressed her gratitude:

"It's fantastic to have this recognised by the Open Data Institute Awards since we are very much aligned in growing the open data ecosystem for all."

The Open Data Publisher Award was then announced by Sir Nigel Shadbolt - the finalists were Open NY, Epimorphics and WikiData. WikiData were presented with the award “for sheer scale, and built-in openness”. Lydia Pintscher from WikiData outlined the projects’s hopes for the future:

“We hope that a lot more people will become aware of our work and join us on our way to bringing free knowledge to everyone.”

Building on this promising hope for the world of open data were Shoothill, who won the Open Data Innovation Award. Shoothill was the first firm in the UK to work on developing software based on the live flood data from the Environment Agency, and was accredited by one judge as being “a great tool to keep people informed and protected from flooding”.

“This award will help us continue to build the profile for agricultural data sharing, and open data for other forms of development around the world.” The Open Data Awards demonstrated a hopeful encouragement for individuals and companies worldwide to participate in the practice of publishing and exploiting open data.