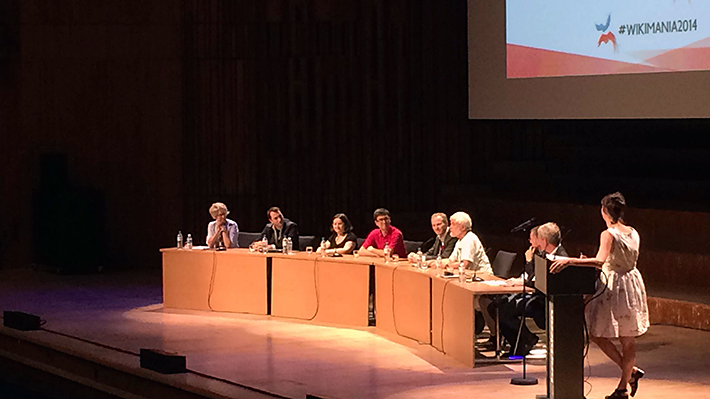 Over 2000 people came together at the Barbican Centre in London from the 6th to the 10th of August to take part in Wikimania 2014; a conference, hackathon and celebration of all projects hosted by the Wikimedia foundation, including Wikipedia and Wikidata.

On the Friday, the programme focused on open data; the best ways of handling, making use, and creating an impact from the vast amount of data being published by government and private organisations as they begin to commit to the open data movement.

The ODI was at the heart of this conversation, delivering several sessions throughout the day

Sitting on the panel were:

Key recent successes discussed by the panel included the use of open data by the media, with the Financial Times’ exposure of property being held through companies in offshore tax havens coming from data that had been opened up from the Land Registry for England and Wales.

Another development has been the evolution of the private sector’s relationship with data, as corporations are increasingly recognising the economic and reputation benefits of open data. Food giant Tesco has pledged to open its food supply chain data in a bid to win consumer trust after the horse meat scandal in 2013.

Open data is increasingly being used to solve real-life challenges throughout the world. This is apparent in the response efforts to humanitarian disasters. OpenStreetMaps (OSM), coined the ‘Wikipedia of Maps’, is working towards creating a complete map of the world which is free to use and can be edited by all. OSM was instrumental in the relief efforts to areas worst hit by Typhoon Haiyan in the Philippines, and provided a digital infrastructure as NGOs and the government pooled their information to respond to the natural disaster.

Looking to the future, the panel felt that the next big challenge that needs to be cracked in order to ensure open data is more widely used is to increase collaboration between data publishers, analysts, and consumers. More collaboration could hopefully lead to the creation of a data ecosystem based on conversations. This can help to refine and peer review datasets meaning that errors are found, fed back to publishers and corrected, resulting in more high quality data being produced and utilised.

At the same time, linking end consumers with original data sets creates chains in data knowledge. Providing people with a way of tracing back to the original data set can lead to more people engaging with data and understanding its value.

Members of the panel agreed that we are still in the early phases of using open data to solve real world problems. As more organisations recognise the need to open their data, the best way to create an impact from this is to grow the open data ecosystem: getting more people involved in conversations about data and encouraging creative collaboration.