Playing with data: our ODI open data board game

For the last six months, on and off, a few of us here at the Open Data Institute have been working on an open data board game. Ellen Broad and Jeni Tennision discuss its development

Board games have been experiencing a resurgence in the past few years and, perhaps unsurprisingly, there are several keen board game enthusiasts here at the ODI. The idea of an open data board game was born out of discussions between us about why Monopoly was so awful, our favourite games, and the mechanics that made them work. 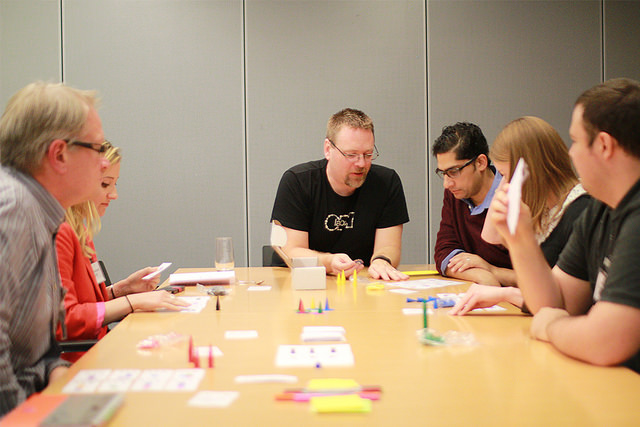 There are lots of different games being tested to help explain open data concepts and benefits. We’ve seen Tim Davies’ open data capacity building card game, and Better With Data have been trialling a game to help people understand the potential of their data assets to solve problems. Open data can often be seen to be a technical or ‘specialist’ area, and games are a great way to introduce people to the subject and show that you don’t have to be a data expert to work with open data.

The ODI open data board game

The ODI open data board game is about using data to build tools that improve the world you live in. It’s a tile placement game. Players work individually to complete their tools, but need to work collaboratively to keep the health of the world from declining. Different kinds of data – data about transport, weather, health, geography, democracy and products – are represented as hexagons, and players place their hexagons in different patterns to complete tools. 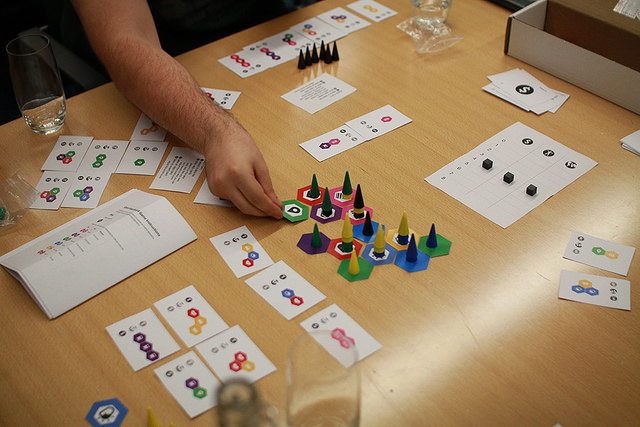 The little cones you see in the picture (the cones of Datashire, as some Parks & Recreation fans have begun calling them) help to keep track of who has built what tools. Over the course of the game, you get a sense of which (open) datasets are underpinning the most tools. In effect, you see which data is most important to your data infrastructure.

We’ve put all of the instructions and game pieces on github for people to print and play themselves.

Where we are now

We have been playing variations of a board game for six months now. Work has been fairly ad hoc, with people usually getting together over lunch whenever we’re all in the office, or during team offsites. After a few wrong turns, we have a basic working prototype that we’re pretty excited about.

We have a working mechanic that we can build on and get creative with – we can add design features and a narrative, to continue to build the world of the board game. And because the mechanic works, we can get different people playing it and have multiple games happening at once, and keep coming up with ideas to make it even better.

We trialled the Open Data Board Game properly for the first time outside ODI at the Pre-Summit Training Discovery day a couple of weeks ago. Four groups of players tried two different versions of the game, and afterwards we talked about improvements and enhancements. The game was a fantastic way to get people talking about open data and what it’s like for people publishing and using open data in real life.

Some of the key takeaways we got from our board game testers included:

The other big challenge with the existing prototype is that we haven’t nailed down what our winning conditions look like. Players ‘lose’ if the health of the world – social, environmental and economic – declines to zero. But what does ‘winning’ in the world of open data look like?

Having personal missions to complete will shape individual winning conditions, but how do players know when they’ve won collectively? Right now, the only thing resembling a collective ‘win’ is having achieved high levels of health of the world. But it feels a bit dissatisfying. What should ‘winning’ look like in the world of open data?

Now that we have a strong working prototype, we want to accelerate improvements and design. We’re going to start regular play testing on Friday evenings at ODI, and welcome anyone who wants to come and play. We have four copies to play in the office, so can host up to 20 players at a time. Keep an eye on Ellen (@ellenbroad) and Jeni’s (@JeniT) twitter handles for updates on game testing Fridays coming up, and get in touch if you’re planning on coming along.

You can also have a go at printing and playing the game yourself via github. Let us know your comments and what you’d like to see in our Open Data Board Game.