Guest Blog: Opening up local government spending - was it worth it? 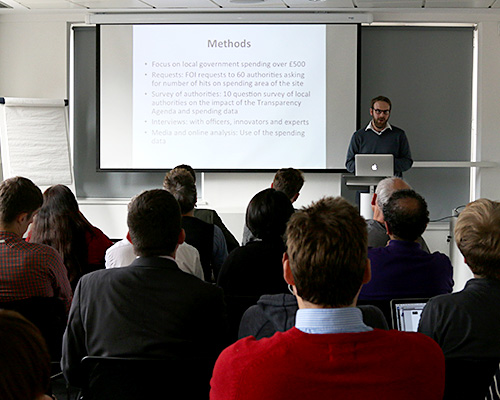 The UK government is committed to leading the world in openness. As part of the push to transparency, all English local councils have been asked to publish all their spending over £500 online on a monthly basis. These ‘swift and simple changes’ could ‘revolutionise local government’ and ‘unleash an army of armchair auditors’, with citizens analysing the data and holding their local councils to account.

For the last year I’ve been researching the impact of the publication, using a combination of surveys, FOI requests and interviews. I’m asking whether making this new financial information available has had an impact: are members of the public using the new information to make local government more accountable? Do they to participate more in local politics? Do they understand more about their local council?

The evidence to date shows a limited number of people are looking at the information. A mixture of journalists, local activists and a few citizens are using the data to hold councils to account and there have been some stories in the local press and the national press. There are a few armchair auditors appearing around the country such as here and here (especially, as Eric Pickles pointed out, in Barnet) but it takes time, resources and interest –something not many of us have.

There are obstacles. The data itself isn’t as informative as it could be, and it can’t yet be compared with other councils or give a full picture of what is being spent and how (see your own local council site-mine is here). Some councils are not convinced that the public will spend their time looking through spread sheets. When you contact your council it’s generally for amenities or services-bins or planning-rather than spending.

To make it more complicated the spending data is also very political: it isn’t clear exactly what the government wants to see and they are sending out ‘mixed messages’. Some feel the information, at a time of severe cuts, is intended to make councils look like reckless spenders or wasters.

The lack of use and obstacles does not mean the reform has failed. Far from it. Councils can see the benefits of all this information for both citizens and for themselves. It is very early days and the real changes will arrive when new applications such as Openly Local or app.gov (still in development) allow you to quickly search the data, compare spending with other councils and join it up with other ‘local’ information. In the future, local councils could have applications that combine their spending data with local information in the style of TheyWorkForYou or the Open Data Communities hub.

If you are interested or would like to help with my research please contact me on [email protected] See Ben's previous blog on the ODI website here. Opening up government spending - was is worth it? with Ben Worthy by Open Data Institute