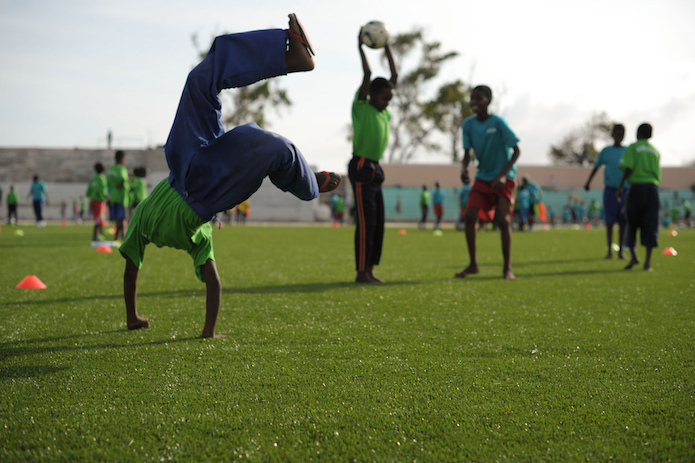 Children have fun at the Fifa Football Festival in Mogadishu, Somalia, in August 2013. CC BY 2.0, uploaded by [AMISOM Public Information](https://www.flickr.com/photos/au_unistphotostream/9547481681/in/photolist-fxFkF8-87Ft9b-fxVGRA-fxFnS4-uiauts-uiarEb-uxraaQ-uiiA3t-uzYuE2-uxr299-tCJqPY-uzKCJ8-uiinvK-tCJkUs-tCUqUr-uzKwBt-uzjfBj-uzjedh-uzKtiK-uiiejV-ui9ZqY-uzKqKi-uzKpBB-uzY788-uzKnwp-ui9Uhw-uzKjWz-ui9RLj-uzY1DH-uzKh26-uia7rJ-uzKeTD-uxqwnw-uziQCh-tCTXi4-uziNab-ui9yUd-uziKyQ-uihJTB-uziFN3-8jeyHx-vkrWgY-aML4Ap-vDtuwn-7kCSx8-gNvt7-8rygb5-gNvwp-87FuVU-89vAz6 “AMISOM Public Information").

On 26 February a new Fifa president will be elected at a special congress held at the organisation's headquarters in Zurich. The election, which will be voted on by Fifa's 209 members, will see a new president named for the first time in nearly two decades.

With the fog of Fifa’s abuses of power continuing to linger – as previous chief Sepp Blatter is reportedly planning to attend the congress in defiance of his financial misconduct sentence – could a commitment to open data help the new president to differentiate himself from the corruption of the past?

Open data is data that anyone can access, use and share. In the aftermath of Sepp Blatter’s tumultuous resignation announcement in June 2015 Prime Minister David Cameron called for open data to be placed at the heart of Fifa reform and "play a crucial role in cleaning up football." While Fifa’s own Reform Committee has declined to discuss open data, the argument for its adoption remains clear.

The publication of open data has, to date, been generally limited to governments or public bodies. Enabling citizens to freely access data related to the institutions and people that govern them is essential to a well-functioning, democratic society: it makes them transparent and accountable to their citizens. Although an international governing body like Fifa has no citizens of its own, football’s enduring global popularity means that its governance will continue to have an enormous impact on millions of us. A host nation of the Fifa World Cup will often have to commit to extensive investment in national infrastructure such as stadia, roads and transport, and it continues to spend on development projects in education, medicine and science around the world. Given its financial clout and its ability to impact people’s lives, the New Fifa Now coalition argues that the governing body should "have the same level of transparency and accountability that most citizens expect of their governments, major institutions and organisations."

Opening up Fifa’s data - including datasets related to its expenditure and contracting, governance and development projects - would enable the world to better understand the decisions it makes and help us to hold its members to account. This would represent a huge change in culture for an organisation that is struggling to rid itself of a toxic reputation. It may also help to alleviate the growing concerns that it is incapable of reforming itself and achieving genuine, long-lasting change.

On 20 January 2009 Barack Obama used his first day in office as President of the United States to issue the directive for the Open Government Initiative. It was not until four years later that he signed an executive order that made open and machine-readable data the new default for government information, but the initiative helped to delineate his administration from what came before.

Fifa’s Reform Committee has recently said that it will help move Fifa "towards improved governance, greater transparency and more accountability". Around the world, it is the adoption of open data that has helped governments, like the United States’, and other public bodies to transform this hazy rhetoric into tangible results.

A commitment to open data would not only help a new Fifa president to mark the start of a new era for the organisation but, more importantly, help to bring about the true reform it so desperately needs.

A game of two halves: how open data can tackle corruption and save Fifa’s future

How will the future affect our data infrastructure?